The original town was laid out as Williamsburg by the Lords Proprieters in colonial time. But a lone, unusually large white pine was found along the Black River, far to the south of the species' normal range. Since tall white pines were ideal for use as masts for ships, the king claimed it, and the king's broad arrow mark was put upon this tree to prevent anyone else from cutting it. It was never cut. Over time, the county kept the name Williamsburg, but the county seat became known as The King's Tree, giving rise to its modern name. Nobel Prize winner Joseph L. Goldstein is a native son of Kingstree. 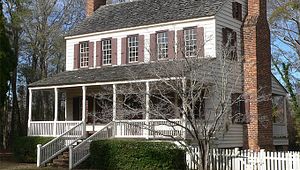 This plantation home of James Witherspoon (1700-1768) was built in Williamsburgh Township in 1749. In August 1780, the house and grounds served as an encampment for 100 British dragoons and a large number of Tories. House was moved into Town limits in... Read More 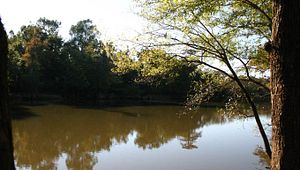 Wee Tee contains more than 12 miles of river frontage and is primarily bottomland hardwood and coastal flood plain habitats. Included in the property is a 200-acre lake and numerous ponds and oxbows. These bottomlands and aquatic systems provide... Read More

What exactly is pig pickin’? It’s the best way to eat hot-off-the-fire barbecue. That's exactly what you'll find each fall in Kingstree, SC, at the annual Kinstree Pig Pickin'. You'll love every juicy strip of vinegar-sauce riddled pork that melts in... Read More

The highlight of the year is the annual Muscadine Festival that is held on the weekend of Labor Day. Visitors from all over come to celebrate the sweet fruit in a variety of ways and to re-live if only in spirit day-to-day life on the farm. The... Read More