The people of Ellenton learned in the early 1950's that their town would be uprooted by the United States Government. 200,000 acres of land was purchased for $19 million in Aiken and Barnwell counties for a massive nuclear weapons complex. The site generated nuclear components for the hydrogen bomb. It was common to see homes, churches or stores traveling down the road on the back of trucks. In 1972, the town created the "Atomic City" Festival in remembrance of the 6000 people who were displaced in order to provide national security during the Cold War. The Aiken County Historical Museum has a permanent exhibit commemorating the event.
Visit the Website

Aiken gained a reputation during the first hundred years as "a place for a splendid time to be had." Those words reign true today. Once a summer retreat for Charlestonians escaping the threat of malaria, Aiken became a Winter Colony during the late... Read More

Three Swiss German families settled in the area on large land grants from King George II of England in 1735. since the head of each family was named "John," the settlement became known as "John Town." The Battle of Dean's Bridge (Revolutionary War)... Read More 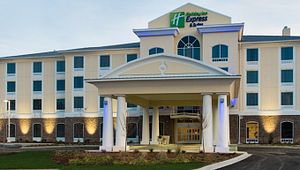 Auten's is a family restaurant where you can feel right at home. They serve a country style breakfast and lunch, and the restaurant has a very different theme. It is decorated in a school house style with old school desks and artwork. They try to greet... Read More