The Fort Hill, an antebellum plantation, was home of 19th century politician John C. Calhoun who served as Secretary War under James Monroe, the seventh Vice President under John Quincy Adams and Andrew Jackson, Secretary of State under John Tyler, and a sitting US Senator at his death in 1850. Calhoun and his wife Floride raised seven children at Fort Hill, including daughter Anna Maria. Thomas Green Clemson married Anna Maria Calhoun at Fort Hill in 1838, residing on the plantation both as newlyweds and later in retirement. Ambassador Thomas G. Clemson was a diplomat to Belgium, and he willed his collection of art to “adorn the wall of Fort Hill.” Clemson later served as Superintendent of Agricultural Affairs and is considered the first acting Secretary of Agriculture. He was a supporter of the Morrill Land Grant Act. In addition to the Greek revival main house, the complex includes Calhoun’s office, a reconstructed kitchen, a springhouse, and gardens. Fort Hill interprets the enslaved African-Americans who toiled on the plantation, and there are adjacent historical markers designating the field slave quarters, cemetery, and agricultural areas. Thomas G. Clemson willed 814 acres to the state for building an agricultural and mechanical college, later known as Clemson University. The Fort Hill National Historic Landmark site is furnished as an historic house museum primarily with original furnishings. The Fort Hill National Register block is a South Carolina National Heritage Corridor designated heritage tourism attraction.
Visit the Website 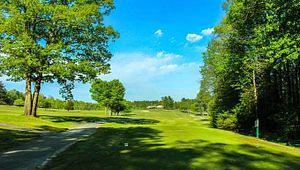 This club has three nine hole courses that are played in 18-hole combinations. All three courses were cut out of the woodlands, have very tight fairways and are moderately hilly. Natural water hazards come into play on many holes on the Middle and Back... Read More 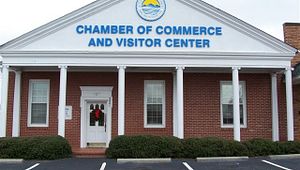 The Greater Easley Chamber of Commerce provides information about the Easley and Powdersville communities for visitors and businesses. Read More 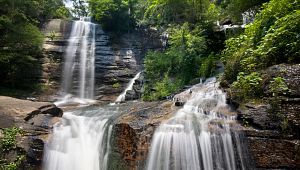 Twin Falls is also known as Reedy Cove Falls, Rock Falls, or Eastatoe Falls. The left and larger of the falls pitches from a height of 75 feet over a massive slab of granite, while the right side manages a short drop onto another chunk of stone and then... Read More 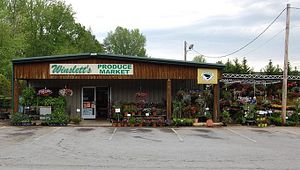 Located approximately five miles north of Easley in the rolling foothills of Pickens County, Hunter Farms grows strawberries and flowers. You can come out and pick your own berries or you can stop by and get your berries already freshly picked. Bring... Read More

Table Rock Resort is set in northwest South Carolina at the base of Pinnacle Mountain. The resort grounds span over 500 acres. Located within the resort are spectacular views of the mountains, a natural waterfall, 18-hole golf course (The Rock) and a... Read More