The Island was first inhabited by the indigenous Seewee Indians and later the English. Legend has it that the only other occupants of the island were pirates who buried their treasures for safekeeping in the deserted dunes and woods. During the Revolutionary War a British Army contingent of 2,500 men attempted to raid a Colonial encampment on adjacent Sullivan's Island. Many men drowned and the attack failed when the force attempted to cross the treacherous waters of the Breach Inlet between the two islands. The area was of significance again during the Civil War, as a point of departure for the CSS Hunley, the first submarine to sink an enemy vessel. Today the island welcomes visitors to its six miles of white sandy beaches and to Wild Dunes Resort, a 1,600-acre oceanfront paradise offering world-class golf, top-ranked tennis and recreation programs, three restaurants and over two miles of pristine beach. Stay in your choice of the AAA Four Diamond Boardwalk Inn, a villa or luxury home.
Visit the Website

Only 23 miles from Charleston, Seabrook Island Resort offers a serene setting where vacationers peacefully coexist with the island's natural wildlife. Stay in a luxurious villa overlooking the Atlantic, tee off on two championship golf courses, or play a... Read More 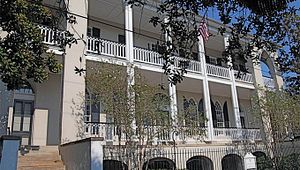 The Rev. Daniel J. Jenkins established the Jenkins Orphanage in 1891 for African-American children following an encounter with four youngsters living on the streets of Charleston. The original site of this orphanage was at 20 Franklin St. in the Old... Read More

Comfort Suites West of the Ashley

At the Comfort Suites West of The Ashley, both business and leisure travelers can unwind in relaxing accommodations. Hotel provides easy access to Beach, Shopping and Dining Read More

Nestled just outside of historic Charleston SC, the Residence Inn North Charleston is the perfect place to have as home base for your South Carolina Low country visit. Our Location is central to the Charleston Area Convention Center & Coliseum, Tanger... Read More