Site of the Ring Fight

The Tamassee area of Oconee County is also closely associated with General Andrew Pickens and the Cherokee campaign of 1776. Follow SC 11 north of Walhalla to Oconee Station Road and turn left on S.37.95. On your right, approximately three miles is Oconee Station State Historic Site, a militia outpost and Indian trading post from the late 18th century. About one mile further was the site of Pickens' last home, the Red House. A small granite marker designates the spot, which affords the visitor a beautiful view of Tamassee Knob and the adjacent valley. Andrew Pickens built his home not far from the site of the Ring Fight, one of the most unusual battles of the Revolution. While leading a scouting party of 25 men in advance of Andrew Williamson's army, Pickens was surrounded by 185 Cherokee Indians. Although outnumbered more than seven to one, the small party defeated the Indians by firing in relays under the direction of Pickens. Tradition also recounts how the Patriots successfully set fire to the canebrake so that the popping of the burning cane would fool the enemy into thinking reinforcements were arriving. 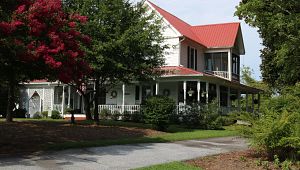 Sunrise Farm is a beautifully restored c. 1890 Victorian farmhouse with 10 acres of peaceful rolling hills. The Inn is situated in the foothills of the Blue Ridge Mountains. Located within minutes of Clemson University, Lake Keowee and the Jocassee... Read More 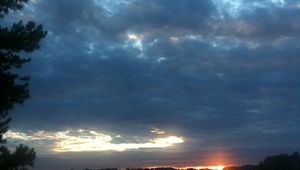 Nestled in the foothills of the Blue Ridge Mountains, High Falls County Park serves as a gateway to a variety of recreational activities. This 44 acre park , established in 1971, is located on the beautiful waters of Lake Keowee. At High Falls, visitors... Read More 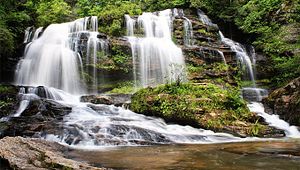 Long Creek Falls is a 50-foot cascade near the confluence with the Chattooga River. The 1.6 mile unofficial trail is difficult and is not well-marked. Read More

Originally a lumber town with six sawmills, Salem became an agricultural town latching onto cotton production. Today the area is well known for outdoor activities and mountain adventures. Lake Jocassee is one of the most pristine lakes in South... Read More