Market Hall was built in 1841 for the use of the commissioners of the market and was also used as a meeting hall. Since 1899 it has been home to the Confederate Museum. The hall was the commercial center of Charleston for many years and served as a recruiting station during the Civil War. A National Historic Landmark, and considered one of Charleston’s best examples of Greek Revival-style architecture, the building was meticulously restored to its former grandeur. The museum contains a reference library, and such exhibits as cannons, uniforms, swords, flags and other artifacts of the War Between the States. The lively open-air market under the museum features everything from produce to antiques, small shops and restaurants.
Visit the Website

Located on scenic Shem Creek, Charleston's most photographed creek and home to the local shrimping fleet. Shem Creek Inn is the most desirable location this side of Historic Charleston! Minutes from Charleston's Historic District and only a short... Read More

*DUE TO COVID-19, PLEASE CHECK EVENT WEBSITE FOR UPDATES!* A local tradition that stretches back to 1978, this 10-K race draws more than 30,000 participants every year. From lean elite runners, to weight-watching weekend warriors, to those who just run... Read More

Christmas on the Battery

Theatrical performances complement a candlelight tour of the Edmondston-Alston House. Adorned in period costumes, performers reflect on past Christmas events that not only touched the lives of the Edmondston and Alston families, but also the city of... Read More 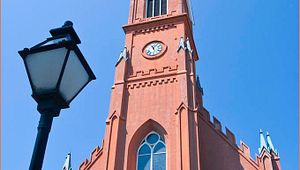 The second Lutheran congregation organized in Charleston in 1840, primarily for German speaking settlers. The present Gothic building, with its 297-foot steeple, was erected in 1872 and was rebuilt following a devastating fire in 1965. Spectacular... Read More 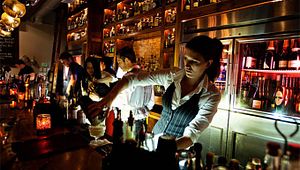 The Cocktail Club presents a refined atmosphere on upper King Street dedicated to the art of the craft cocktail. The Cocktail Club invites you to sample our extensive selection of house-made infusions, rare spirits and farm-to-shaker beverages which... Read More

Handmade with organic ingredients, Freehouse Brewery's beers are inspired by their location on the Ashley River in Charleston. Stop by the taproom for a pint on Tuesdays through Fridays from 3 to 8pm and Saturdays from 1 to 8pm. Read More