Prince George, Winyah Parish, among the oldest parishes in South Carolina, was formed in 1721. Its church possesses a handsome Jacobean gable which is one of two noteworthy examples remaining in South Carolina. The church, c. 1750, is a rectangular handmade brick building with semicircular apse at the east end and vestibule at the west. From the vestibule and at the roof line rises a square tower, terminating with octagonal sections. One section contains the clock; the other is an arcaded belfry with balustrade, crowned by a cupola like roof and a large cross. The tower and chancel were added in 1824. It was occupied by British troops during the Revolution, at which time the interior was badly burned. The interior features a central aisle leading to the altar in the apse, old box pews, handmade woodwork, a flagstone floor, organ and choir gallery in the west end. The church cemetery is surrounded by a wall of molded handmade brick. Prince George Winyah Episcopal Church is listed in the National Register. Sponsors of Annual Plantation Tours March 29 & 30th, 2019, https://www.princegeorgeplantationtours.com
Visit the Website

Birthplace of Thomas Lynch Jr., signer of the Declaration of Independence, this Lowcountry plantation was built in 1740. Though privately owned, the house is open from the attic to the cellar and is furnished in 18th- and 19th-century antiques. The... Read More 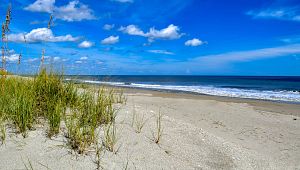 Once through the private gates of DeBordieu Colony, you quickly realize you have entered a community that is completely dedicated to preserving the beautiful canvas nature has provided. Elegant homes, exceptional amenities and some of South Carolina's... Read More 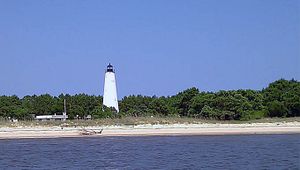 Located on North Island near the entrance to Winyah Bay, the original tower is one of two built in the late 1790s. Destroyed by a hurricane in 1806, it was rebuilt in 1812 of white-washed brick. The current tower is 85 feet high with 124 steps leading to... Read More

Like most things in Murrells Inlet, there's a story behind the name of this restaurant. It seems that on one of his dockings, Blackbeard left behind one of his sailors. No food - just a case of rum was left behind for this hapless fellow named, that's... Read More

The beautiful Winyah Auditorium is a 501(c)3 nonprofit volunteer-led organization, housed in the Historic Winyah School circa 1908. Restored to it's original design in 2012, the Auditorium is a prime example of Classical Revival architecture, and both... Read More

We stand to protect and preserve the integrity and enjoyment to all that is Pawleys Island. Promoting local businesses and showcasing the brilliant art of our locals every day so that all can live in paradise. Staying true to the area, all artists within... Read More