The likeness of Broadway star Nina Mae McKinney is just one of the faces that grace this wall of fame. McKinney was the first African-American actress to perform in a sound movie, "Hallelujah," in 1929. She also starred with the great Paul Roberson in the film, " Sanders of the River," in 1935. In 1938, McKinney was inducted into the Black Film Makers Hall of Fame. Her singing and dancing techniques served as a model for such successors as Lena Horne and Dorothy Dandridge. She died at the age of 54 in New York on May 3, 1967.
Visit the Website 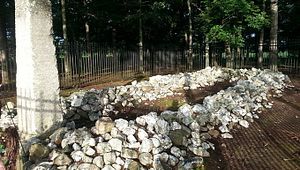 Buford's Massacre took place on May 29, 1780, in the Waxhaws region of South Carolina, when Lt. Col. Banastre Tarleton's legion overtook Lt. Col. Abraham Buford's retreating Virginia Continentals, who had arrived too late to aid in the defense of... Read More

Kilburnie, The Inn at Craig Farm

Recommended by Southern Living, Kilburnie is a most welcoming Bed and Breakfast with the feel of a small boutique hotel. Experience true hospitality in the quiet and graceful comfort of this beautifully restored Antebellum country home surrounded by... Read More

Locally owned and operated, Benford Brewing produces small-batch craft beer with only natural-based ingredients, using pure well water for a great tasting and pure brew. Schedule a tour of the brewery and hear the amazing story of how the owner's... Read More