Boone Hall is one of America's oldest plantations, established in 1681 by Major John Boone. The famous Avenue of Oaks, a breathtaking three-quarter mile drive lined with giant live oaks draped with Spanish-moss, dates to 1743. The plantation manor dates back to 1936. Bordering the avenue of oaks are nine original slave cabins, which housed the plantation's house servants and skilled craftsmen. This cluster of cabins is one of the few groups of such historic structures remaining intact in the Southeast and the only brick slave street in the U.S. Boone Hall and its grounds were prominently featured in the TV mini-series "North & South" Civil War epic by John Jakes, and Alex Haley's "Queen," among others. Crops have been continuously grown and produced here for more than 330 years. Peaches, strawberries, and tomatoes as well as many other fruits and vegetables are still grown, with U-Pick fields open in season. The main modern market on Hwy. 17 is now open for business.
Visit the Website

Situated only moments from the historic district, the beautiful and unique 14 story “round” Holiday Inn Charleston Riverview; captures the spirit of Charleston and invites you to share the spectacular views of the cityscape and the Ashley River. We are a... Read More

For over 30 years, Beachwalker has specialized in memorable vacations on Kiawah and Seabrook Islands. We offer over 150 properties, from scenic 1 bedroom villas to luxurious 7 bedroom ocean-view homes. Please allow us, "your family at the beach," to book... Read More 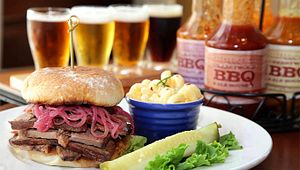 Genuine Southern barbecue smoked over local hardwoods and complemented by chefs' signature sauces. Cherrywood BBQ and Ale House has something for everyone from our hearty barbecue platters, signature sides and unique salads to our thoughtfully prepared... Read More

Palmer's Pinckney Inn is a charming bed & breakfast located in the very heart of Charleston, SC - the Number One City In America for touring & as a travel destination. Edit Read More

Whether you are visiting for business or pleasure, we are minutes from it all! Enjoy the historical sites & beauty of downtown Charleston, Boone Hall Plantation, SC Aquarium, USS Yorktown, Patriots Point Naval & Maritime Museum, Memorial Park. Our... Read More